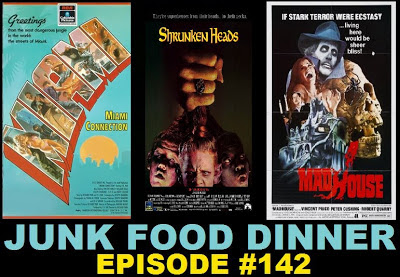 This week, we throw the Nerd News out the window and dive right into our Top 5 Movies of 2012! There's sushi, time travel, super heroes, scary monsters and so much more. We also confess to the worst movie we saw last year.
As for the movies, they're weird!
First up, is The Miami Connection, a little-known 1987 action film, written, directed by and starring martial artist Y.K. Kim. The film is the cult gem du jour, as it has recently been uncovered and re-released by Drafthouse Films. The  movie itself concerns a rock band that must protect themselves against mobsters and motorcycle ninjas - all while looking for their friend's long-lost dad!

Next is Full Moon's first theatrical release: Shrunken Heads from 1994. Directed by Richard Elfman (The Forbidden Zone) and starring Meg Foster (They Live), a group of kids are murdered and brought back to life via a Haitian vigilante to seek revenge.

Finally, the legendary Vincent Price plays a horror movie actor who is being stalked by his own murderous character: "Dr. Death" in 1974's Madhouse. The movie co-stars Peter Cushing and has nothing to do with John Larroquette.


All this plus witty banter between friends, soundboard antics, Face to Face Chat, Junk (voice)Mails, DVD & Blu-ray releases, Nerd News and so much more!

NOTE: Parker's internet crapped out (thanks, Comcast, you... you dicks!), so he had to do most of the show from his phone, so it sounds kinda crummy in parts. Sorry, guys. You can send mean tweets to Parker about this @FinalParker.