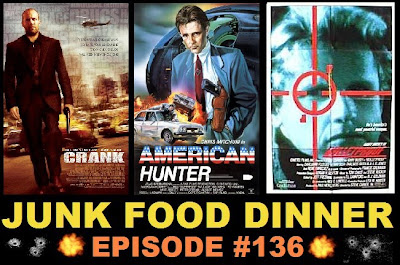 This week we give thanks to bullets, punches and explosions as we look at three testosterone-filled action flicks.

First, hitman Chev Chelios (Jason Statham) has been poisoned by some Chinese shit and has to get revenge before his heart stops in 2006's "Crank," directed by the team of Neveldine & Taylor. The cast also features Dwight Yoakum, Amy Smart and Efrem Ramirez (Pedro from "Napoleon Dynamite").

Next, everyone is looking for the mico film and everyone gets punched in "American Hunter" from 1990. Directed by Arizal and starring Chris Mitchum, this Indonesian movie perfectly combines unintentionally wacky hijinx with bad ass action.

Finally, it's your worst nightmare, Butthorn. Mexican Muslim Communists steal an American tank and only Gary Busey can save the day in "1988's "Bulletproof." Also, Danny Trejo is there for a minute and Fred Olen Ray co-wrote it!

Got a movie suggestion for the show, want to give your opinion on a movie we talked about or just want to tell us we suck? Drop us a line at JFDPodcast@gmail.com. Or leave us a voicemail: 347-746-JUNK (5865). Also, leave some iTunes reviews and follow us on twitter @JunkFoodDinner!