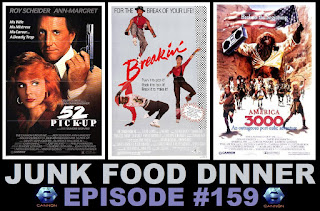 Many of the films released by The Cannon Group (aka Cannon Films) in and around the 1980s have established themselves as cult classics. This week, we'll take a look at three cult gems produced by Israeli cousins Menahem Golan (director of The Apple) and Yoram Globus, who purchased Cannon for $500,000 in 1979. In doing so, we'll encounter sex, lies, videotape, deodorants, big feetsmen, boom boxes, rap talkers, and belts aplenty.

First up, Roy Scheider's being blackmailed by a trio of well-cast blackmailers led by John Glovers (Gremlins 2: The New Batch) while his wife (Ann-Margret) tries to run for city councilwoman. With his mistress, Kelly Preston (Metalstorm: The Destruction of Jared Sin) already brutally offed by the blackmailers, how will Scheider ensure his wife's safety while pitting his foes against each other? Find out in our first Cannon film of the evening, 1986's 52 Pick-Up!

Next, we throw down the cardboard and start dancing to the rap talker's beat, with 1984's Breakin'! A frustrated young jazz dancer played by Lucinda Dickey meets up with two break-dancers, O-Zone and Turbo. Together they become the sensation of the street crowds, which includes Jean-Claude Van Damme for no reason. Also, Ice-T is the rap talker for this film.

Finally, it's the apocalypse but that's neggy a bad thing as that sasquatch is totally hot plastic. The comedic post-apocalyptic VHS classic adventure flick America 3000 from 1986 has a bigfoot with a boom box. What else could you ask for?

All this plus witty banter between friends, the battle royale for the Listener Theme Show contest, complete confidentiality, no police involvement, electro rock, animal cruelty, Junk (voice)Mails, Dennis Leary and so much more!