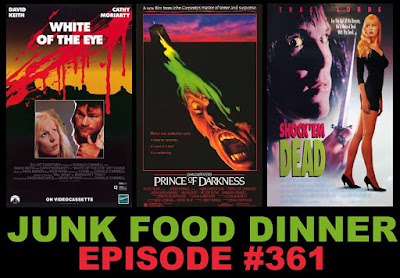 We're back with a game-changing, life-affirming episode, Junkies!

Our man Hatless Jackson Stewart joins us to discuss a fateful concert in LA where Parker, Sean, Jackson, Wife and Travis from GwarCast saw the immortal Corey Feldman LIVE. Did we find out what was up with the youth? Tune in to find out!

As for Nerd News and DVDs, there's only one piece hot enough for this episode. Jackson's movie, "Beyond the Gates" drops on Blu Ray and DVD this week, featuring an audio commentary track by the Junk Food Dinner boys! Go buy it!

As for movies, we're doing three picked by our Junk Food Dinner Patreon Pals this week. Speaking of Patreon, our first 2-hour bonus episode just dropped for $5 patrons. Go check it out at Patreon! First, a woman learns that her stereo equipment-installing husband may be a killer in "White of the Eye."

Next, a group of scientists and priests learn that Satan may be imprisoned in the basement of a local church in John Carpenter's "Prince of Darkness."

Finally, Traci Lords stars in "Shock em Dead," a film about a guitar player who sells his soul to an old voodoo lady to become a rock god.