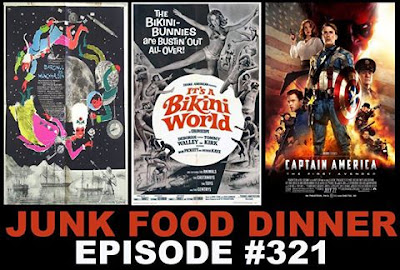 Hey, Junkies! We're back with chili dogs and the Declaration of Independence to celebrate!

First up, a fancy man and his astronaut friend go on thrilling adventures in 1961's "Baron Prasil," aka "The Fabulous Baron Munchhausen." The tales go from 18th Century Turkey to battles with sea monsters to wars in this yarn that influenced Terry Gilliam.

Next, In "It's a Bikini World," a hunky dude pretends to be his non-existent, intellectual brother to win the heart of a liberated '60s woman. Sid Haig and The Animals co-star in this feel-good romp.

Finally, Steve Rogers undergoes a scientific transformation to become a super soldier in 2011's "Captain America: The First Avengers." For the last 3 years, we've been doing the bad Cap movies. How will Sean and Kevin react to the first one made by talented people with actual money?

All this plus Nerd News, DVDs, Memphis Maniacs, New Orleans Chat, No one will take Parker's Money, Tough Cops and so much more!