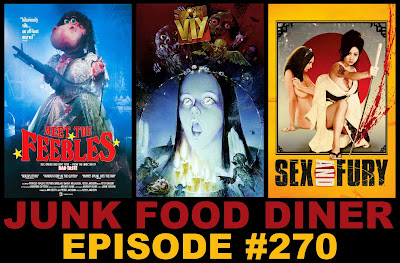 Have you ever noticed the beautiful lighting in this toilet? We’re kicking off July in semi-ghoulish fashion with a trio of offbeat, off-color International cult films. Take a whirlwind tour of New Zealand, the Soviet Union, and Japan from the safety of your couch with your JFD pals. It’s like a trip to Epcot Center with double the decapitations and roughly the same amount of deflowered virgins. It's more fun than a flying coffin!

Up first, we tackle a long-requested fan-favorite, 1989's Meet the Feebles from Pete Jackson! From the creator of Bad Taste comes a film with no taste at all. Murder, suicide, sex, drugs, rock and roll and puppets collide in this twisted parody of The Muppet Show. It's got a song about sodomy!

Next! We stop by Soviet-era Russia for a fantastical retelling of a classic folk tale about a crazy witch in a mausoleum. Often cited as an influence for Evil Dead, 1967's Viy features exactly zero blood-rain, as it should. Instead, it's got the craziest witch-based movie ending in the history of insanity. Trust us, it's nuts!

Finally, we visit 1973 Tokyo, land of the rising sun and the pinku film, for a little Sexy & Fury! This Toei Pinky Violence flick heavily influenced Quentin Tarantino, but for some reason he chose to leave the clothing on his sword-fighting actresses, unlike director Norifumi Suzuki's rape-y sleazefest. A mostly Japanese cast is unexpectedly joined by Swedish cult erotica star Christina Lindberg.

All this plus witty banter between friends, movie characters we can't stand, an unexpected call from Warren Beatty (from Dick Tracy!), a taste of the Piven, Randomizing our Ghoul Summer Dikk Picks, Nerd News and This Week in DVD, toilet-based houseflies, Bowmans' Bookshelf, a fair share of nudity and blood spray, more skype noise than normal, surfing the Internet for info, asexual Parker, absolute confidentiality, continued lack of police involvement, sneezes, belches, gleeks and a whole lot more!

Also, if you like the show, please take a minute and subscribe and/or comment on us on iTunes, Stitcher, Blubrry or Podfeed.net. We'd sword-fight just about anyone, naked and shivering in the snowfall, for your love and support.