JFD354: A Bucket of Blood, The Wild Angels, Frankenstein Unbound 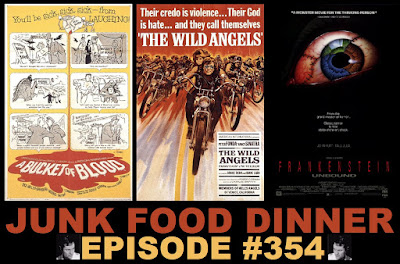 This week we kick off Me-arch; an entire month where each week one of your JFD hosts picks a director who they love and highlights three flicks from their career. This week, it's Kevin's week and he chose The King of the B's himself, Roger Corman!

Up first, Dick Miller stars as a put-upon busboy at a beatnik coffee house who only wants to be accepted by the artists and poets who frequent it. Unfortunately, he has no real talent. However, when he accidentally kills a cat he gets the idea to cover it in clay and pass it off as art. When that gets him noticed, he sets his sights on bigger prey in 1959's A Bucket of Blood.

Then, Peter Fonda leads a gang of misfit bikers who roam Southern California looking for a good time in 1966's The Wild Angels. But when one of their crew (Bruce Dern) gets shot up by the cops, the gang hatches a plan to bust him out of the hospital but fails to realize dudes with gunshot wounds probably need medical attention.

And finally, John Hurt is a futuristic scientist who develops a new weapon for the US Government, but it also opens a time warp that sends him back to 1817's Switzerland where he runs into Victor Frankenstein (Raul Julia), his monster and Mary Shelley (Bridget Fonda) in 1990's Frankenstein Unbound.

All this plus witty banter between friends, the death of the IMDB message boards, Sean's adventures at the opera, impressions of Get Out, a surprise appearance by Parker's dog, backlash for Sean's Gwar views, sad Nerd News, Blu-ray Picks, continued lack of overt police involvement, and a whole lot more!


Got a movie suggestion for the show, want to give your opinion on a movie we talked about or just want to tell us we suck? Drop us a line atJFDPodcast@gmail.com. Or leave us a voicemail: 347-746-JUNK (5865).
Also, if you like the show, please take a minute and subscribe and/or comment on us on iTunes, Stitcher, Blubrry or Podfeed.net. Check us out onFacebook and Twitter! We'll make it to drive-in season with your love and support.