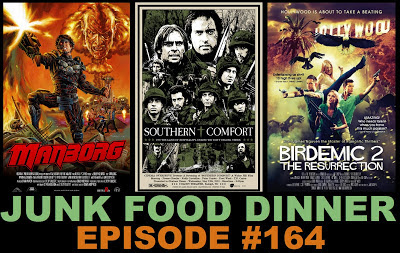 It's a doozy of a week here at Junk Food Dinner. First, we fire up the old Randomizer 5000, and load it up with dozens of strange, off-beat and just plain bad flicks and see what three it spits out for us to watch on an upcoming episode. What movies did the Randomizer deal us? Tune in to find out!

Then we get into our movies this week, and it only gets crazier.

Up first, we take a look at the post-apocalyptic, sci-fi, action movie Manborg from 2011. This stylized low-budget flick from the Astron 6 crew is about a soldier (Matthew Kennedy from Father's Day) who is killed while fighting against the army from Hell (literally) but is brought back to life as half man, half cyborg. But life on Earth hasn't gotten much better, as he and a group of rogue misfits must battle robots, demons and finally the evil Count Draculon. Shot almost entirely in front of green screens and for the ridiculously small budget of $1,000, this goofy film directed by young filmmaker Steven Kostanski is a model for sci-fi efficiency.

Then, in Southern Comfort from 1981, a group of soldiers in the Louisiana National Guard, including Keith Carradine, Powers Boothe, Fred Ward and T.K. Carter, find themselves in actual combat after stealing some canoes from a group of rustic Cajuns. Things escalate quickly as the men are forced to fight for their lives and try to navigate their way our of the dense Louisiana swamp in this gritty "war" drama directed by Walter Hill.

And finally, the movie so... uh... "nice", they mad it twice. Yes, that's right, those shitty CGI birds are back in Birdemic 2: The Resurrection from 2013. Once again, director James Nguyen reunites all your favorite good looking (but bad acting) characters to do battle with killer birds and preach to you about the importance of living a green lifestyle. Lovers of bad cinema rejoice!

All this plus witty banter between friends, Nerd News, this week's DVD & blu-ray releases, complete confidentiality, no police involvement, the Randomizer ,catastrophe, Donald Lloyd of the Junk Food Dinner Warehouse, Junk (voice)Mails, and so much more!