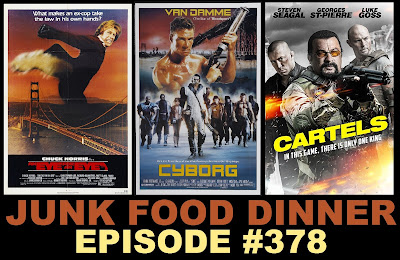 Shock and Awe-gust explodes with another week of action flicks, this week we are joined by Garon Cockrell of the Never Not Funny podcast and PopCultureBeast.com as we examine three films starring giants of the action world.

Up first, Chuck Norris plays a San Francisco cop who goes rogue after his partner is murdered. After teaming up with his slain partner's wife (Rosalind Chao) and her kung fu expert father (Mako), Norris goes up against an evil drug ring including Christopher Lee and Professor Tanaka while trying not to get hassled by his former boss Richard Roundtree in An Eye For An Eye from 1981.

Then, Jean-Claude Van Damme plays a mercenary in the post-apocalyptic wasteland of the future trying to hunt down a female robot who has information that could help cure the plague that has decimated the world. Unfortunately a gang of cyberpunks are out to stop him in the Cannon Films release Cyborg from 1989.

And finally, an older, heavier Steven Seagal plays a DEA agent trying to get to the bottom of what happened during the transport of a captured international drug kingpin in Cartels (AKA Killing Salazar) from 2016.

Got a movie suggestion for the show, want to give your opinion on a movie we talked about or just want to tell us we suck? Drop us a line at JFDPodcast@gmail.com. Or leave us a voicemail: 347-746-JUNK (5865). Add it to your telephone now!
Also, if you like the show, please take a minute and subscribe and/or comment on us on iTunes, Stitcher, Blubrry or Podfeed.net. Check us out on Facebookand Twitter! We'd love to see some of your love on Patreon - it's super easy and fun to sign up for the extra bonus content. We see you and we see your love and support.
Labels: An Eye for an Eye Cartels christopher lee Chuck Norris Cyborg Garon Cockrell Jean Claude Van Damme Podcast Richard Roundtree shock and awegust Steven Seagal