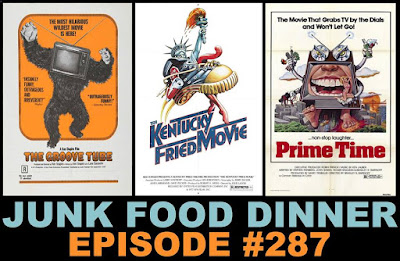 With Schlocktober over, we try to laugh in the face of winter. We talk about 3 sketch comedy movies from the 70s.

First, up a psychedelic freak out called The Groove Tube from 1974. Richard Belzer and Chevy Chase show up in this movie full of dirty jokes and stoner humor.

Next, Abrahams/Zucker and John Landis cut their teeth in this sketch movie full of wacky commercials, fake movies and rude titties. Kentucky Fried movie from 1977.

Finally, we watch Prime Time aka American Raspberry, where the US turns chaotic after a pirate tv station pops up to show crass humor and harsh satire.

All this, plus DVDs, Nerd News, Tom from Adelaide, Sean hates another classic, Parker's unwillingness to laugh, No Shave November, stingers, Stung, did we truly do it?, new T-Shirts and so much more.