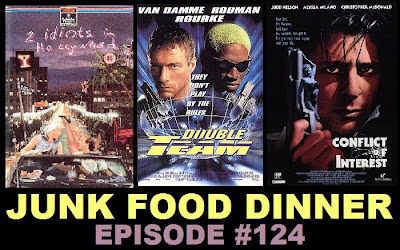 Hey, Junkies! Mark isn't here this week. He was murdered and set on fire while celebrating his birthday. In his stead, we have friend of the show, Kevin Merryman of CulturalAtrocities.com!

First, a couple of dummies leave their hometown of Dayton, Ohio for Tinseltown in 1988's "Two Idiots in Hollywood," written and directed by Stephen Tobolowsky. The film is a surreal musical meta comedy that's obsessed with pop culture that lampoons the movie business.

Next, Jean Claude Van Damme joins forces with NBA star Dennis Rodman to fight terrorism (in the form of Mickey Rourke) in "Double Team" from 1997. Hark Tsui directs this film about terrorism, revenge and children... and, uh... basketball metaphors and weird stuff like that.

Also, if you like the show, please take a minute and subscribe and/or comment on us on iTunes, Stitcher, Blubrry or Podfeed.net. We gain psychic connections with murderous monsters from your love and support.