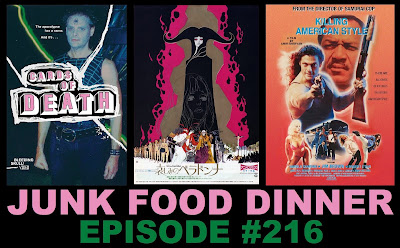 Things get really weird this week on Junk Food Dinner. Parker Bowman's on the road so we call in the ghostly Mark Freado, and we're also joined by special guest Zack Carlson of Bleeding Skull and Destroy All Movies for a lively chat about 35mm, misplaced irony, fat ten-year-olds and shot on video oddities!

First up, a nearly lost film is rediscovered and released on VHS in BLEEDING SKULL VIDEO's very first release, Cards of Death from 1986! Strange Nazi-themed killers, deadly tarot cards, and a surprisingly bloody sexual appetite populate the mysterious W.G. MacMillan's only directorial effort, and we have lots of things to say about it.

Next up, we freak out in Japan with Eiichi Yamamoto's psychedelic, grotesque, and beautiful Belladonna of Sadness from 1973! Incredibly inventive (and perverted) animated sequences are used to tell the story of a tortured peasant in a feudal land who is accused of witchcraft, and some really weird stuff happens. Trust us.

All this plus witty banter between friends, not a single Yacht Party, an all-star lineup of callers, the forbidden fruit of late night television, water droplets, phantom handjobs, sick-ass gold jackets and so much more!

Also, if you like the show, please take a minute and subscribe and/or comment on us on iTunes, Stitcher, Blubrry or Podfeed.net. We'll raise a tiny chainsaw for your love and support.

Be sure to check out BleedingSkull.com!