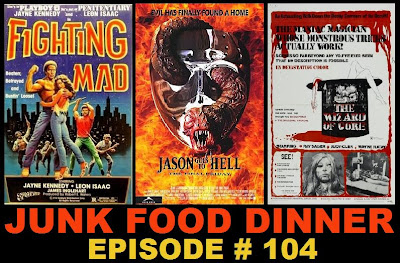 JFD104 is here! Listen as a grizzled old bounty hunter appears and reveals an entirely new mythology and introduces you to a few new hosts that weren't mentioned on the previous 103 episodes, but were allegedly always there. Also, the Necronomicon will come into play somehow.

First up, a dude is double-crossed and left for dead by his gangster buddies. Naturally, after he's nursed back to health by some Japanese soldiers on a deserted island, he seeks revenge in "Fighting Mad," (aka "Death Force") from 1978.

Then, we celebrate the holiday by enduring 1993's "Jason Goes to Hell: The Final Friday." Jason (Kane Hodder) is killed and has to jump into new bodies before his long-lost family stabs him.

Got a movie suggestion for the show, want to give your opinion on a movie we talked about or just want to tell us we suck? Drop us a line at JFDPodcast@gmail.com. Or leave us a voicemail: 347-746-JUNK (5865).
Labels: Adam Marcus Fighting Mad Friday the 13th Herschell Gordon Lewis Jason Goes to Hell Kane Hodder Podcast Something Weird Wizard of Gore