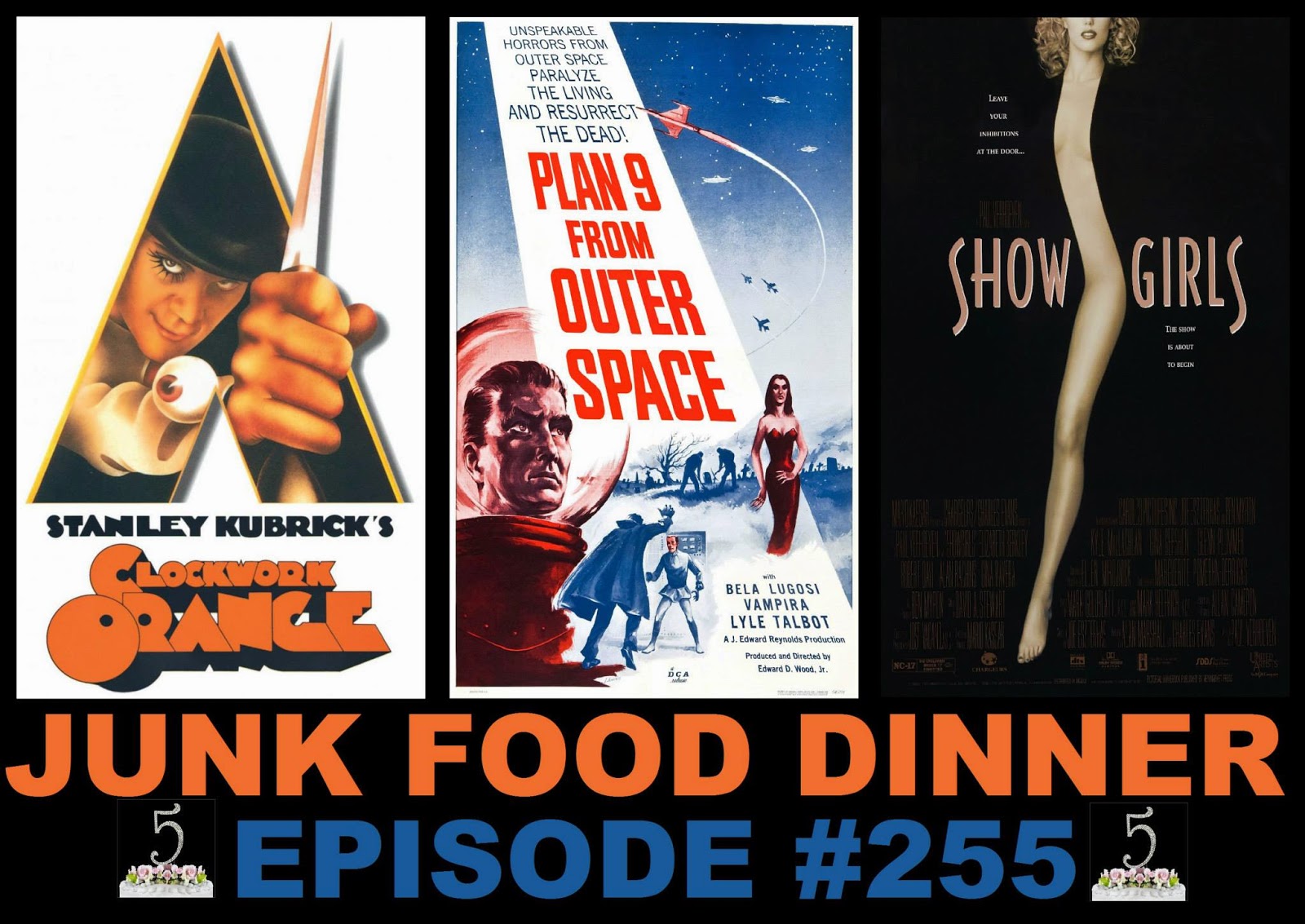 Junk Food Dinner turns five years old this very week, and to celebrate we're breaking out all the stops. In addition to our reviews of three bonafide classics, we have an extra-sized onslaught of listener junkmail, and your three charming hosts recount their top five favorites (and top five worst favorites) of the past year's worth of reviews. It's a real hootenanny!

Up first, we follow Stanley Kubrick and Malcolm McDowell over to jolly ol' England for a bit of the ol' ultraviolence, with a side of eggy weggies. It's 1971's A Clockwork Orange, the dystopian chronicle of a young proto-punk hoodlum, Alex DeLarge, his violent exploits and subsequent reform. What'd we think of this classic? It might give you a bit of pain in the gullliver.

Next! We finally stop messing around and get down with the weird and wild world of Edward D. Wood, Jr., when we review his 1959 space-zombie epic Plan 9 From Outer Space! Often marketed as "the worst movie ever made", this low-budget schlockfest also features the final appearance of Bela Lugosi. It's camptastic!

Finally, what happens in Vegas stays in Vegas, as Kyle MacLachlan repeatedly states in 1995's Showgirls. But despite that, we're here to spill the beans on Jesse Spano's boob-filled film debut. It's about the rough and tumble life of a girl who can't stop storming out of scenes in a huff, and who also is trying to be a dancer or something. Did we mention boobs? Directed by Paul Verhoeven?!

All this plus witty banter between friends, dish-wash-talk, high-waisted jeans and longbutts, Face to Face surprise chats, the predictably unpredictable Parker Bowman's Fist Church, Juggalo Shaming, No News and No DVDs, absolute confidentiality, the part where Kevin is surprised by Kyle's theme song, continued lack of police involvement, sneezes, belches, gleeks and a whole lot more!

Also, if you like the show, please take a minute and subscribe and/or comment on us on iTunes, Stitcher, Blubrry or Podfeed.net. We'll cast these pods for another five years with your love and support.