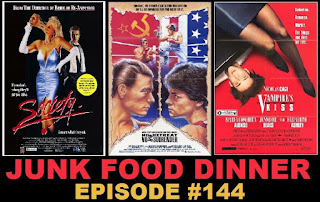 You guys know how they make those mystery flavored Dum-Dums? It's the run-off from when they switch flavors so you don't really know what you're getting. That's kind of like what this weeks episode is like.

Up first we FINALLY take a gander at what is hands down our most requested film - SOCIETY from Brian Yuzna. A young (30 year old) man must learn to cope with why he feels so much different than the rest of his family - but just how different is something he could never prepare himself for. After a year of emails, voicemails, and the occasional death threat we're finally taking this one on.

Next, the only thing higher than the kicks is the amount of racial stereotyping in the confusing martial arts flick - NO RETREAT, NO SURRENDER. A young (actually young) man moves from LA to Seattle and has to fight everyone from the town fat kid to JCVD himself, along with the help of his new best friend and the ghost of Bruce Lee. This is another one we've had a surprising amount of requests for.

Finally, it's Nic Cage at some of his most unhinged as he portrays a yuppie in the midst of a complete mental breakdown. After a series of unsatisfying one night stands, Peter Lowe is visited by a sexy and deadly child of the night. From there out it's fake accents, fake teeth, and real bloodshed as we debate the merits of VAMPIRE'S KISS.

All this plus witty banter between friends, pen arguments, soundboard antics, sushi puns, Junk Mail, DVD & Blu-ray releases, little to no Skype issues, Face To Face chat, Nerd News and so much more!

Got a movie suggestion for the show, want to give your opinion on a movie we talked about or just want to tell us we suck? Drop us a line at JFDPodcast@gmail.com. Or leave us a voicemail/phone sex (It's message season, after all.): 347-746-JUNK (5865).

Also, if you like the show, please take a minute and subscribe and/or comment on us on iTunes, Stitcher, Blubrry or Podfeed.net. We gain soft spots for retarded guys from your love and support.
Labels: Brian Yuzna Bruce Lee butt skin casual racism Nic Cage No Retreat No Surrender phone sex Society Vampire's Kiss