JFD167: Deadbeat at Dawn, I Saw the Devil, Captain America 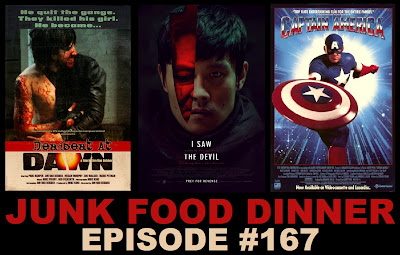 Violence! More Violence! And misguided comic book adaptations! There's something for everyone on this episode of Junk Food Dinner.

This week we take a look at hometown hero Jim Van Bebber's low-budget debut feature Deadbeat at Dawn from 1988. Written, directed, produced and starring Van Bebber, this gritty teen gang revenge flick was filmed in Dayton, Ohio and features some intense action and and gore as leader of the gang The Ravens, Goose (you guessed it, Van Bebber), seeks revenge on his rivals after his girlfriend is murdered.

Then, we get another dose of revenge and violence, this time by way of Korea, as we explore I Saw the Devil from 2010, directed by Kim Jee-Woon (The Last Stand, The Good, The Bad, The Weird). When special agent's (Byung-hun Lee) wife is kidnapped and murdered by a vicious serial killer, played by Min-sik Cho, he sets out on a path to revenge via a twisted game of cat and mouse.

And finally, in honor of Independence Day, we watch Captain America! No, not the 2011 one with Chris Evans... nope, we're doing the 1990 one directed by cult-miester Albert Pyun (Radioactive Dreams, Cyborg, Alien from L.A.) and starring Matt Salinger  as the patriotic super hero from the 1940's who gets frozen and brought back in the 90's to once again do battle with the evil Red Skull.

All this plus witty banter between friends, Nerd News, this week's DVD & blu-ray releases, complete confidentiality, no police involvement, stories about flaming King Kongs, civic pride, Donald Lloyd of the Junk Food Dinner Warehouse, Junk (voice)Mails, and so much more!

Also, if you like the show, please take a minute and subscribe and/or comment on us on iTunes, Stitcher, Blubrry or Podfeed.net. We gain jumbo giant jellyfish from your love and support.
Labels: Albert Pyun Byung-hun Lee Capt. America Captain America Dayton Deadbeat at Dawn I Saw the Devil Jim VanBebber Kim Jee-Woon Matt Salinger Min-sik Cho Podcast