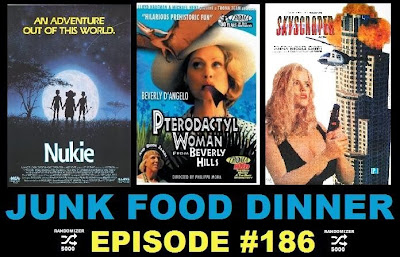 The Randomizer 5000 picked our movies this week. And it seems to hate us.

First, an Alien searches Africa for his lost brother and some tissues in the 1988 ET- rip off, "Nukie." This South African flick is widely regarded as one of the worst movies ever made.

Next, an archaeologist meets a shaman invokes a curse that turns his wife into a sexy dinosaur in 1997's "Pterodactyl Woman from Beverly Hills." This flick stars Beverly D'Angelo and was directed by Philipe Mora ("The Howling" 2 & 3) and put out by Troma. Which are all the phrases that the Randomizer looks for.

Finally, terrorists take over an LA high rise that houses a Japanese business and it's up to Bruce Willis to stop them. Wait. Wrong movie. It's up to Anna Nicole Smith to stop them in 1996's "Skyscraper." Also regarded as one of the worst flicks of all time, Smith seems too hopped up on goofballs to even stand, much less be an action star.

We also announce the fate of the JFD Logo and the Parker Action Figure!

All this plus witty banter between friends, Nerd News, this week's DVD + blu-ray releases, Dinosaur Jr., complete confidentiality, no police involvement, no voicemail marathons, no cookie women, more insect fear and so much more!

Also, if you like the show, please take a minute and subscribe and/or comment on us on iTunes, Stitcher, Blubrry or Podfeed.net. We gain the powers of the Thorn Cult through your love and support.