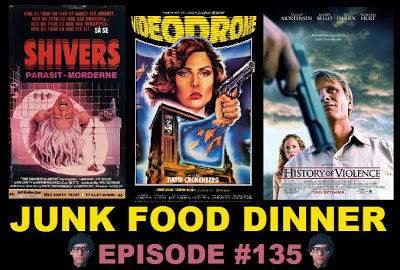 Hold on to your guts, people, because this week Junk Food Dinner explores three films by one of the masters of violence and perversion, David Cronenberg.

Up first, all Hell breaks loose when a parasite, which is a combination of aphrodisiac and venereal disease, spreads through a secluded apartment complex, causing an outbreak of sexual chaos in one of Cronenberg's first films, Shivers (AKA They Came From Within) from 1975, starring Paul Hampton, Barbara Steele and Lynn Lowry.

Then, James Woods is Max Ren, a purveyor of sleazy cable programing, who stumbles upon a broadcast signal transmitting extreme torture, but as he explores the transmission further he soon discovers the true nature of the programing and the effect it's having on his mind in 1983's Videodrome, co-starring Deborah Harry and Sonja Smits.

And finally, Viggo Mortensen is a small town family man, who becomes a local celebrity when he kills two thugs in self defense at his diner. But when news spreads of heroic actions, it brings out people and secrets from his past in the 2005 crime thriller A History of Violence, co-starring Maria Bello, Ed Harris and William Hurt.

All this plus witty banter between friends, soundboard antics, news of molesting puppets that aren't Black Devil Doll from Hell, Junk (voice)Mails, DVD & Blu-ray releases, Nerd News and so much more!

Also, if you like the show, please take a minute and subscribe and/or comment on us on iTunes, Stitcher, Blubrry or Podfeed.net. We gain giant holes in our stomach from your love and support.
Labels: A History of Violence Barbara Steele David Cronenberg Deborah Harry Ed Harris James Woods Lynn Lowry Maria Bello Podcast Shivers They Came from Within Videodrome Viggo Mortensen William Hurt