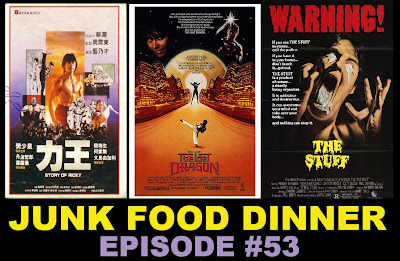 Junk Food Dinner returns after a horrible, accidental hiatus. This episode is the first of a pair of Listener Appreciation shows where we check out movies recommended by fans.

Up first, we talk "Riki-Oh: The Story of Riki," a 1991 Hong Kong action flick about a man stuck in prison that's full of gore and bloody explosions and hand mutilations.

Then we take a look at another martial arts flick, albeit less violent and more funky, in 1985's "The Last Dragon," the story of Leroy Green and his struggle against a greedy arcade owner and one of the coolest villains of all time, Sho'Nuff, the Shogun of Harlem.

Finally, Parker shares a dark, shameful secret as we examine 1985's "The Stuff," a horror flick about an evil white goo that eats people from the inside out.