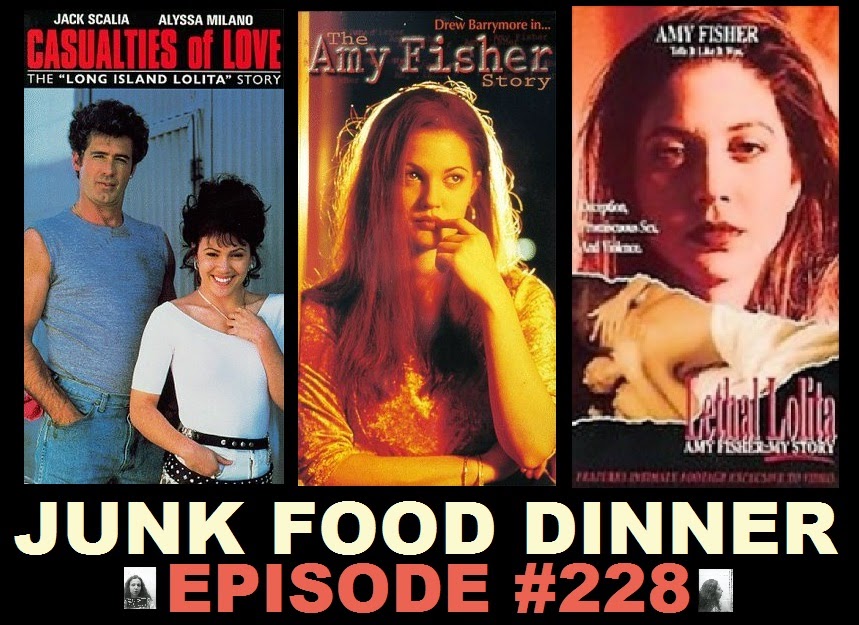 Ripped from the headlines! JFD returns this week and travels back to the mysterious world of 1993, where not one, not two but THREE made-for-TV movies were produced around the true life story of a Long Island teen, her affair with a married auto mechanic and her attempted murder of his wife.

Up first, it's Casualties of Love: The Long Island Lolita Story starring Alyssa Milano as Amy Fisher and Jack Scalia as Joey Buttafuoco. This version produced for CBS tells Joey Buttafuoco's side of the story and portrays Fisher as a manipulative psycho who's obsession lead her to attempted murder.

Next, we take a look at The Amy Fisher Story starring Drew Barrymore as Amy Fisher and Tony Denison as Joey Buttafuoco. This one was made for ABC and throws in Harley Jane Kozak as a journalist to add the media's side to the story. This version while maybe the best produced is also the sleaziest with additional R-rated footage added in for the home video release.

Finally, we round things off with Lethal Lolita (AKA Amy Fisher: My Story) starring Noelle Parker as Amy Fisher and Ed Marinaro as Joey Buttafuoco. NBC's version tells the story from Amy's point of view and portrays Fisher as the victim of manipulation and abuse. This movie deal also helped the real Amy Fisher post her 2 million dollar bail while on trial for attempted murder.

All this plus the wittiest banter between friends, hacked nudes chat, The Memphis Maniac, Long Island accents, Nerd News, DVD/Blu-ray releases, Rats of Humans, Dad-Rock songs about Amy, James Gunn love, and so much more!

Also, if you like the show, please take a minute and subscribe and/or comment on us on iTunes, Stitcher, Blubrry or Podfeed.net. We avoid jail time because of your love and support.
Labels: Alyssa Milano Amy Fisher Casualties of Love Drew Barrymore Jack Scalia Joey Buttafuoco Lethal Lolita Long Island Lolita made-for-TV-movie Noelle Parker Podcast The Amy Fisher Story