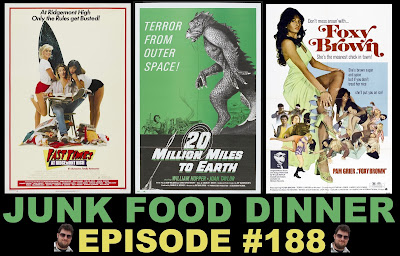 Well, this is Kevin... 's episode of Junk Food Dinner as Me-vember chugs right along.

This week K-Diggity gushes about three of his favorite flicks and hopes and prays Parker and Sean feel the same way about these beloved classics.

Up first, Cameron Crowe and Amy Heckerling take us through a year in the life of a group of 80's California high schoolers in Fast Times at Ridgemont High from 1982. Featuring an all-star cast of young actors, including Jennifer Jason Leigh, Judge Reinhold, Phoebe Cates and Sean Penn, this movie raised the bar for teen titty flicks into the stratosphere.

Next, the JFD crew travel 20 Million Miles to Earth with a crew of astronauts who return from Venus with an alien goo that soon hatches into a giant monster that terrorizes Italy in this 1957 sci-fi staple featuring ground-breaking stop-motion animation work by the incomparable Ray Harryhausen.

And last but not least, we all fall in love with Pam Grier as Foxy Brown, a super sexy, super bad, one chick hit squad who's out to seek revenge on the no good dope pushers who killed her man. Afros, sexy outfits, evil honkeys, guns, explosions and soul music are plentiful in this exciting blaxploitation classic from 1974 directed by the great Jack Hill.

All this plus witty banter between friends, Parker's slang goes mainstream, Nerd News, this week's DVD and blu-ray releases, Kyle From Kentucky, mechanical men, Moorcock talk, Sammy Hagar and so much more!