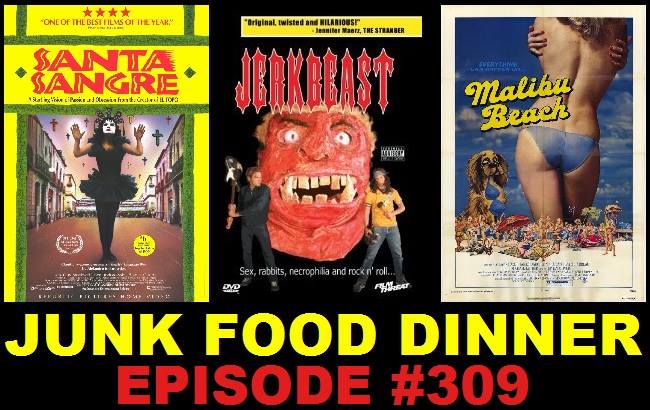 It's the episode with everything. So many things. All of the surprises. You're going to go wild for this episode. We guarantee it.

First up! Severed arms, acid-bath castrations, transgendered luchadores, cocaine & dwarves collide in 1989's Santa Sangre from legendary freak-out king Alejandro Jodorowsky! Part art film, part giallo, and all weirdness, it's called "Jodorowsky's most accessible film", which is really saying something, right? We definitely spoil the crap out of the ending, so go ahead and watch this one before the show.

Up next! Loud-mouthed public access monster Jerkbeast gets his own self-titled movie from 2005. Tour our beautiful nation with the Jerkbeast himself as loud things are yelled and hardcore punk music is played. It's a movie, sort of.

Finally! We hit the beach with the spoiled brats of Malibu in director Robert J. Rosenthal's largely forgotten laid-back seaside hang-out picture, Malibu Beach from 1978. It's like a Van Nuys Boulevard (another Crown International Picture) set slightly west. Who could forget that Dugan?

Also, if you like the show, please take a minute and subscribe and/or comment on us on iTunes, Stitcher, Blubrry or Podfeed.net. Check us out on Facebook and Twitter! We'll teach all the dogs to steal bikinis for your love and support.