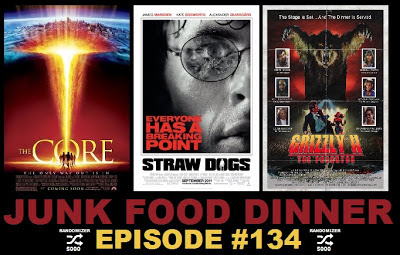 Some of you might remember a while back when we fired up the old Randomizer 2000, well for this round we upgraded the machine - to the 5000 model - but the movie quality remains the same!

Up first, a cast of A-list superstars (Aaron Eckhart, Hillary Swank, Richard Jenkins, Delroy Lindo, Stanley Tucci...uhhh, DJ Qualls, I guess...) pile into a ship 20 years in the making for a doomsday scenario so crazy, we have to put it in all caps here: THE CORE OF THE EARTH HAS STOPPED SPINNING AND NEEDS TO BE RESTARTED BY BOMBS! Also, whales are there to lend a helping hand. Forget everything you know about science (which we assume is a lot if you listen to this show) and feel free to throw up, we know we did - as we examine THE CORE from 2003

Next - Sam Peckinpah's whiskey soaked corpse spins in his grave as we discuss the 2011 remake of his classic 1971 film - STRAW DOGS. When a writer (James Marsden) from tinsel town posts up in the dirty south to get some writing done, he ends up alienating the locals (among them Alexander Skarsgard and James Woods) who harass him and his barefoot wife (Kate Bosworth) to no end. How much can one man bear before he takes matters into his own hands?

Speaking of bears we finally get to the pick of the litter, have a look at GRIZZLY II: THE PREDATOR: THE CONCERT from, ohhhhh around 1983. A wild bear is loose at a concert and some people want to kill it. Now while that may not sound like groundbreaking material let us stress that this is no ordinary "when animals attack" film. Available as only a work print, this unfinished feature contains almost no grizzly but makes up for it with unlicensed Michael Jackson songs, early appearances by Laura Dern, Charlie Sheen, and George Clooney and a whole lot of charm.

All this plus witty banter between friends, soundboard antics, Star Wars hating, Junk Mail, DVD & Blu-ray releases, some of the worst puns Parker has ever come up with, Nerd News and so much more!

Also, if you like the show, please take a minute and subscribe and/or comment on us on iTunes, Stitcher, Blubrry or Podfeed.net. We gain unobtainium from your love and support.