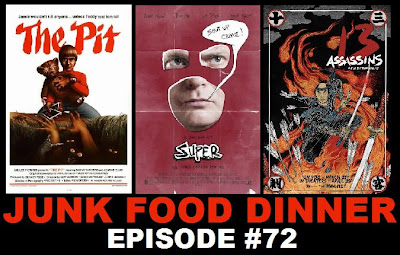 This week, we tell crime to shut up!

Up first, we're joined by Jon Dieringer from ScreenSlate.com to talk about the surprise gem, "The Pit," from 1981. The film is about young Jamie, a freaky sex pervert kid whose only friend is his evil talking teddy bear. Also, there are subterranean troglodytes!!

Then we discuss 2010's "Super," written and directed by James Gunn, starring Rainn Wilson, Ellen Page, Kevin Bacon and tons more cool people. "Super" is the story of a man named Frank whose wife leaves him. To cope with the loss, he becomes a super-hero and horrible violence and whimsical fun ensue.

Finally, we learn that twelve assassins is theoretically possible, but 13 is silly, as we talk about 2010's "13 Assassins," directed by the controversial Takashi Miike. The film was nominated for Best Film at the Japan Academy Prize.

Got a movie suggestion for the show, want to give your opinion on a movie we talked about or just want to tell us we suck? Drop us a line at JFDPodcast@gmail.com. Or leave us a voicemail: 347-746-JUNK (5865).
Labels: 13 Assassins Ellen Page James Gunn Lew Lehman Liv Tyler Lloyd Kaufman Michael Rooker Podcast Rainn Wilson Super Takashi Miike The Pit