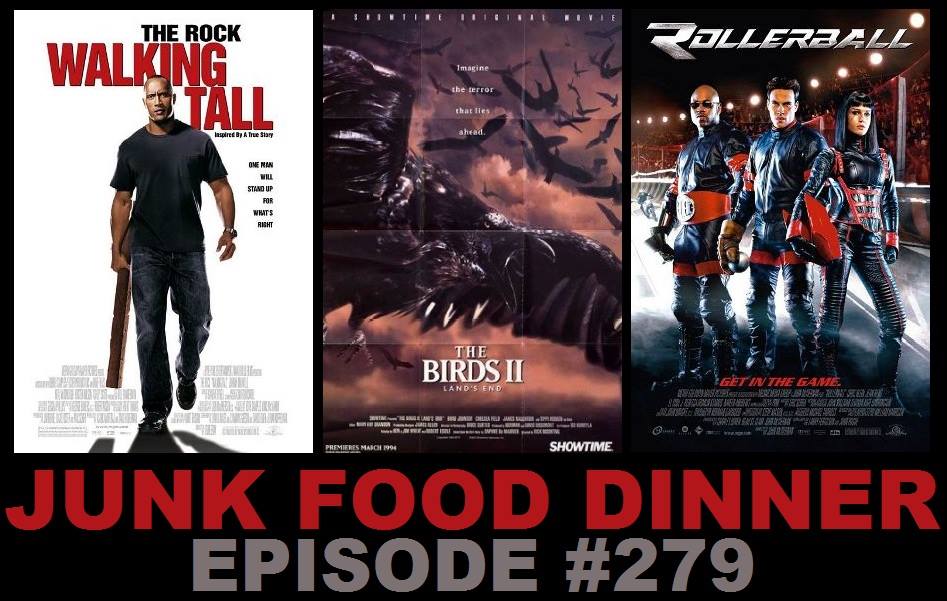 Last week we covered a trio of respected cult classics, and this week we tackle their remakes. With the second time be a charm? Or will we encounter some sophomore slumps? Tune in and we'll find out together.

First up! WWE Films debut feature remakes the story of Buford Pusser, a former professional wrestler-turned-Sheriff in rural Tennessee with Dwayne "The Rock" Johnson. Only this time, he's an ex-marine in the Pacific Northwest, and his name's Chris Vaughn. Oh, and Johnny Knoxville was there. For some reasons? It's the 2004 remake of Walking Tall!

Up next! Sean might've "Freado'd his pick" this week, but if you're really into Lifetime Channel movies, this might've been a smart gambit. It's the 1994 TV movie The Birds II: Land's End, starring a guy who takes his shirt off! Set in the same house as the original, with pretty much the same plot as the original, this sequel features marital difficulties and soft-lens photography. It's emotional!

Finally! If you don't remember who Chris Klein is, be prepared to get painfully reintroduced to his filmography via 2002's Rollerball remake! Reconfigured to take place in the present-day "Central Asia" instead of a dystopian future, this remake resembles the original mostly in name only. Paul E. Dangerously is the color commentator - does that do anything for you? It's a movie.

Also, if you like the show, please take a minute and subscribe and/or comment on us on iTunes, Stitcher, Blubrry or Podfeed.net. Check us out on Facebook and Twitter! We'd change our names and move to Washington State for your love and support.