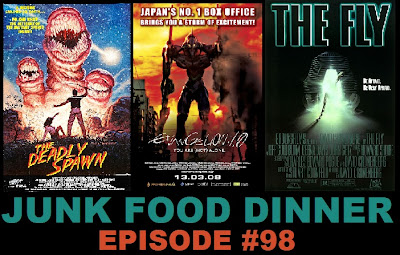 JFD's 98th episode will crank things up to 98 degrees!

First up, we're joined by director Douglas McKeown to discuss his 1983 film "Deadly Spawn." We discuss the film's humble beginnings to its new life in a post-AOL world as a cult favorite. The film itself is an homage to 50s horror, as a deadly (and hungry) life form from space lands in the basement of a home and starts snacking on the inhabitants.

Next up, we take a look at what's regarded by many as the greatest giant-robot anime tale of all time in "Evangelion 1.0: You Are (Not) Alone." The film is a 2007 reboot of the classic show from the '90s about young Shinji Ikari's mission to protect the world from rampaging angels.

Finally, we discuss one of the best creature features of all time, David Cronenberg's 1986 version of "The Fly." The story follows Jeff Goldblum as a scientist who accidentally fuses his DNA with an insect's, transforming him into a half man, half fly creature.

Also, if you like the show, please take a minute and subscribe and/or comment on us on iTunes, Stitcher, Blubrry or Podfeed.net. We get high on your love and support.
Labels: David Cronenberg Deadly Spawn Douglas McKeown Evangelion Geena Davis Jeff Goldblum Podcast The Fly