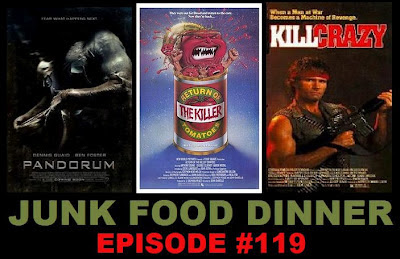 First up, Ben Foster wakes up on a seemingly empty spaceship and has to deal with mutants and madness in 2009's "Pandorum." The sci-fi horror hybrid is a claustrophobic nightmare as the ship's remaining crew struggle to complete their mission, if they can remember what it is.

Next, it's goofy jokes, meta humor and campiness in the classic "Return of the Killer Tomatoes" from 1988, starring George Clooney and John Astin. Prof. Gangrene is out to wage another tomato war on the citizens of Earth and it's up to a couple of slackers to stop him in this sequel to the cult classic.

Finally, war vets on a camping trip get more than they bargained for in 1990's "Kill Crazy," starring, written, and directed by David Heavener. Everything is over the top in this story of war, revenge and small, seemingly out of place shacks.