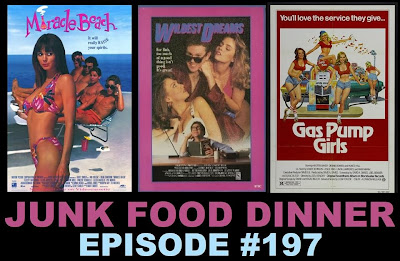 Strap it on. Doan and Sawyer from Kissing Contest join us to talk about three flicks that could only be enjoyed by sweet boys, pleasant fellows or hard ass men.

Finally, a group of sexy teens take over their sick uncles' gas station in 1979's "Gas Pump Girls." Somehow, they manage to turn the place around, despite spending all their time dancing, singing and making sexual double entendres.

All this plus witty banter between friends, Nerd News, this week's DVD and blu-ray releases, speculation on who might be secret cops, complete confidentiality, The SweetMan, Mike Dikk ghoul secrets, The Memphis Maniac, Sean's grim adventures and so much more!