JFD 207: It Conquered the World, Black Caesar, The Island of Dr. Moreau 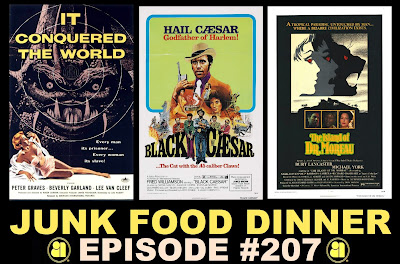 First up, we check out an early Roger Corman alien monster flick starring Lee Van Cleef, It Conquered the World, from 1956! This mysteriously-not-on-DVD cult classic is fondly remembered as one of the better episodes of MST3K, but is the bizarre traffic-cone shaped alien amusing enough without Joel’s commentary? Well, it does have mind-control bats.

Next up, Larry “The Stuff” Cohen directs Fred “The Hammer” Williamson in an underrated blaxploitation gem - 1973’s Black Caesar! James Brown provides the funky soundtrack to this stylish and violent organized crime flick!

Finally, we get sent to The Island of Dr. Moreau! This 1973 adaptation features Burt Lancaster, Michael York, and a whole host of weird looking humanimals - even that cute Hyena one. Stay tuned through the end for flaming tiger attacks. Also, we spoil the crap out of this one so if somehow that matters, be advised.

Also, if you like the show, please take a minute and subscribe and/or comment on us on iTunes, Stitcher, Blubrry or Podfeed.net. We'll transform into hideous humanimals without your love, support, or barring that: a sudden twist ending.