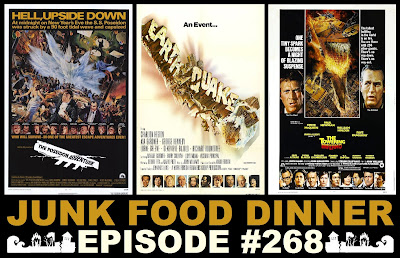 We celebrate all the fathers out there this week with three big-budget 70's DAD-saster flicks! Ask your dad about these movies. I bet he loves 'em.

Up first, we have The Poseidon Adventure from 1972. Leslie Nielsen captains a luxury ship having a New Year's Eve bash out on the high seas. But when giant waves cause the ship to capsize, killing almost everyone on board, it's up to a fiery preacher (Gene Hack-Man) to rally the star-studded cast of survivors (Ernest Borgnine, Shelley Winters, Red Buttons, Roddy McDowall, the grandpa from Willy Wonka, etc) and climb to safety. [Parodied in MAD Magazine as "The Poopsidedown Adventure"]

Next, things get shaky as we take a look at Earthquake from 1974. When 'the big one' finally hits California, it causes mass destruction; crumbled buildings, fucked up roads and dead bodies everywhere. George Kennedy plays a gruff but kind-hearted cop who tries to keep the peace, while Chuck Heston tries to rescue his wife (Ava Gardner) and his mistress (Geneviève Bujold). Throw in appearances by Richard Roundtree as an Evel Knievel-type stuntman and Walter Matthau as the saddest, drunkest pimp/clowns you'll ever see and you've got quite the spectacle.

Finally, the biggest, most expensive and certainly the fucking LONGEST 70's DAD-saster flick, The Towering Inferno from 1974. Remember The Poseidon Adventure? Well, how about instead of a luxury boat it's in a luxury skycraper? This time it's up to Paul Newman and Steve McQueen to save another group of rich people from their ultimate demise from a rapidly spreading fire. Another ensemble cast including William Holden, Faye Dunaway, Fred Astaire, Robert Wagner and a pre-murder Orenthal James Simpson.

All this plus witty banter between friends, disaster flicks through the ages, voicemails with singing, Nerd News and This Week in Blu-ray, a lesson in thrash, downloadable content, dad memories, more skype noise than normal, polls and tallies, absolute confidentiality, continued lack of police involvement (some firefighter involvement this week, though), sneezes, belches, gleeks and a whole lot more!

Got a movie suggestion for the show, want to give your opinion on a movie we talked about or just want to tell us we suck? Drop us a line atJFDPodcast@gmail.com. Or leave us a voicemail: 347-746-JUNK (5865).Also, if you like the show, please take a minute and subscribe and/or comment on us on iTunes, Stitcher, Blubrry or Podfeed.net. We can survive any disaster with your love and support.
Labels: Charlton Heston Earthquake Ernest Borgnine Gene Hackman Leslie Nielsen O.J. Simpson Paul Newman Steve McQueen The Poseidon Adventure The Towering Inferno