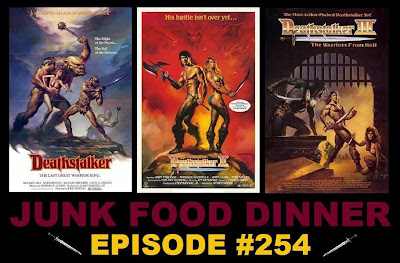 Hey, wizards and warriors! Grab your sword and your sandals, cuz we're going full on fantasy this week with a Deathstalker theme show!

First up, 1983's Deathstalker. Roger Corman executive produces this flick about the titular adventuring swordsman and his crew who join a fighting tournament set up by an evil wizard to weaken his potential threats. Everyone is tough, oiled up and mostly nude.

Next, legendary director Jim Wynorski takes over for the 1987 sequel where Deathstalker falls in with a princess whose evil clone has taken her throne. This one has slightly more clothing and lots more GLOW Girls.

Finally, Deathstalker and the Warriors from Hell from 1988. this flick was featured on MST3K. Deathstalker meets another princess and fights yet another evil wizard.

All this and Nerd News, DVDs, dead Cincinnati Reds, new Junk Mailers, the Batgirl controversy, another Let the Right One In remake, and so much more!