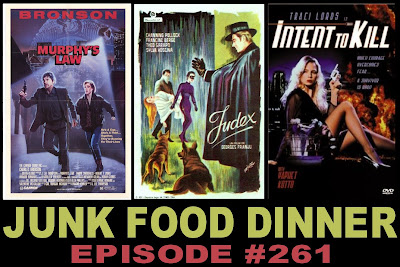 Does the terrible reign of Mark Freado, founding father of Kissing Contest, no know bounds? Only this week's episode of JFD can tell, as he joins Parker and Sean this week to chat about cool names, girls on exercise bikes, and three cult-tacular movies. (Kevin must be in Boston or something)

Up first, we chain ourselves to Charles Bronson and Kathleen Wilhoite while we run from those coppers, while watching the 1986 Canon flick Murphy's Law! This unlikely pairing of actors explore the important subjects of dope farms and mayonaise sandwiches, and we're there to take in all the action. It's got the Bradbury Building!

Next! Old man Freado brings us on a quite a rollicking caper with 1963's Judex! Based on an earlier film serial, this stylized look at man's greed comes from French director Georges Franju (Eyes Without a Face), and has some really sick-ass bird-face masks! On top of that, the lead actor spent time in his life as a magician, which is something.

Speaking of Gawthornes, there's nothing inadvertent about our aim to discuss Intent to Kill. Traci Lords and Yaphet Kotto star in this low-budget sleazy LA crime flick, and almost manage to avoid looking like they were reading their lines on screen for the first time. But hey, sweet car crashes abound.

All this plus witty banter between friends, Grains of Mayonnaise, Characters explaining the titles, The biggest hands Parker has ever seen on a human, People who like capers, Keeping that Saw Theme Going, Yaphet Kotto's Subtle Toupee, Nerd News and This Week in DVD, awkward follow-ups, absolute confidentiality, continued lack of police involvement, sneezes, belches, gleeks and a whole lot more!

Also, if you like the show, please take a minute and subscribe and/or comment on us on iTunes, Stitcher, Blubrry or Podfeed.net. We'll celebrate Cinco de Freado with your love and support.