JFD302: Beer Money, Out There, Aliens 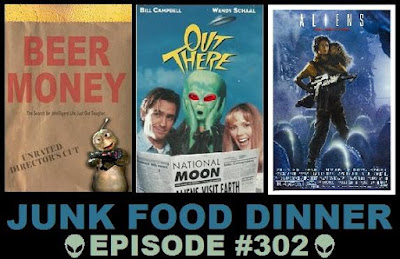 Sci-Fi Ebruary continues this week as we're invaded by space creatures! Some of them are slimy and evil but some of them are nice, which begs the question - who are the REAL aliens?

First, Mark Paul Gosselaar, Mercedes McNab and slacker friends sell a cute, dead (?) extra terrestrial to a TV show in "Beer Money" from 2001. It's a made for the USA Network movie written by JFD favorite Rich Wilkes ("Glory Daze," "The Stoned Age").

Next, after finding photos of aliens at a garage sale, a journalist finds the truth in "Out there." Bobcat Goldthwait, Julie Brown, P.J. Soles and other wacky characters show up in this (also, somehow) made-for-tv movie.

Finally, Ripley is back to take out an alien colony in James Camerons' classic "Aliens." How does Cameron's take on Ridley Scott's Xenomorph stack up to the original? Well, Bill Paxton's in this one, so probably pretty well.

All this, plus Nerd News, DVDs, breaking Sad Nerd News, an odd lack of an intro, technical troubles, an argument for the ages: Poop or Ross Perot, Sean identifies as an Al Queda, Deadpool Chat, Fuckstyles, late Voicemails and so much more!

Got a movie suggestion for the show, want to give your opinion on a movie we talked about or just want to tell us we suck? Drop us a line atJFDPodcast@gmail.com. Or leave us a voicemail: 347-746-JUNK (5865).
Also, if you like the show, please take a minute and subscribe and/or comment on us on iTunes, Stitcher, Blubrry or Podfeed.net. Check us out onFacebook and Twitter! We'll survive the alien invasion with your love and support.