JFD221: War of the Stars, Traxx, SymbioPsychoTaxiPlasm: Take One 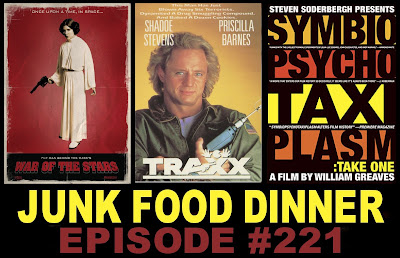 It's a weird episode this week, Junkies, as we do a fan edit of a classic, a (possible) genius satire and a meta documentary.

First, a young farmer saves the galaxy with the Force in 2010's "War of the Stars: A New Hope Grindehoused." The Man Behind the Mask re-edited George Lucas' original 1977 "Star Wars" to fit in with the Grindehouse aesthetic we love so much on JFD. The movie is re-cut, re-scored and re-diculous now. Next, radio legend Shadoe Stevens is a lawman who just wants to kill and bake cookies in "Traxx" from 1988. Lawman Traxx is tasked with cleaning up and "taming" a violent Texas town, while simultaneously trying to get his cookie-making business off the ground.

Finally, a film crew is hired to film a film crew that's following a feature film in 1968's "Symbiopsychotaxiplasm: Take One." Steven Soderbergh championed the restoration of this film and Criterion has released it.

All this plus witty banter between friends, Mystery voicemails, Virtual Mark, suspicion about Kevin's absence, "these limp wrists," Comic Con Chat and so much more!

Also, if you like the show, please take a minute and subscribe and/or comment on us on iTunes, Stitcher, Blubrry or Podfeed.net. We'll create our own Freddy Krueger breakfast cereal with your love and support.