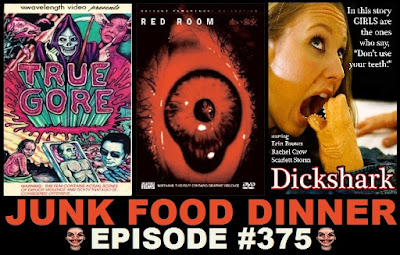 We'll here we are again, kids, Ghoul Summer 2017 is coming mercifully to an end. And what better way to round out the festivities than by partying with the original ghoul himself, Mr. Mike Dikk, formerly of Kissing Contest and currently of Virtual Pros.

Up first, we take a look at another one of those Faces of Death-esque real-life carnage footage comps, True Gore from 1987. This relic from the industrial music scene compiles death footage, animal torture and genital mutilation. Bring the kids!

Next, we step inside the Red Room from 1999. In this low-budget, Japanese exploitation film, four contestants try to out-ghoul one another to win a million dollars. Things start off pretty tame but eventually get very ghoulish. The movie is made even more unsettling by having some of the grossest sound effects ever featured on JFD.

And finally, we suffer through notorious ghoul director Bill Zebub's latest 2+ hour exercise in juvenile schlock, Dickshark from 2016. In this ultra-low budget shit fest, Mr. Zebub gropes strippers boobs for most of the run time and then a rubber, flesh colored shark puppet attacks them.

All this plus witty banter between friends, catchin' up with the Dikkster, ghoul revelations, 3-D movie news, gross noises, all your favorite ghoul drops, Donald Lloyd, our world famous weekly Nerd News and Blu-ray Picks, continued lack of overt police involvement, and a whole lot more!