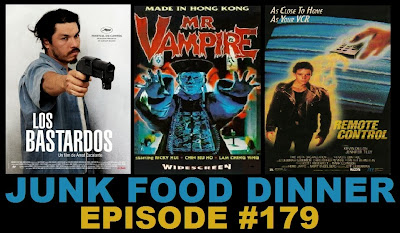 Strap in, Junk Food Junkies because JFD is back with another mind-warping episode chock full of murder, vampires and VHS tapes.

Up first, Amat Escalante takes us on an ultra-realistic ride through a day-in-the-life of two Mexican day laborers who are hired to torment a suburban woman in 2008's Los Bastardos starring Jesus Moises Rodriguez, Rubén Sosa and Nina Zavarin.

Then,Ching-Ying Lam plays a Chinese necromancer who is called upon to exhume the body of a local millionaire. But when the body rises from the grave as a vampire, it's up to Lam and his lackies, played by Siu-hou Chin and Ricky Hui to use their knowledge and cunning to take on the vampires (as well as bumbling cops and sexy female ghosts) in the 1985 Hong Kong horror comedy Mr. Vampire.

Finally, Kevin Dillon plays cosmos, a teenage video store clerk who uncovers a sinister alien plot to take over the world through a cheesy 50's sci-fi flick on VHS. He and his pals Deborah Goodrich, Christopher Wynne and a young Jennifer Tilly must take on an evil conspiracy and destroy all the tapes they can in Jeff Lieberman's Remote Control from 1988.

***Our apologies, as Kevin sounds very Freado-esque during this recording***

All this plus witty banter between friends, Nerd News, this week's DVD & blu-ray releases, Skype noise, complete confidentiality, no police involvement, a chance to win a Parker doll, Dr. Who smack talk and much more.

Got a movie suggestion for the show, want to give your opinion on a movie we talked about or just want to tell us we suck? Drop us a line atJFDPodcast@gmail.com. Or leave us a voicemail: 347-746-JUNK (5865). Also, if you like the show, please take a minute and subscribe and/or comment on us on iTunes, Stitcher, Blubrry or Podfeed.net. We gain tons of new fighting techniques from your love and support.