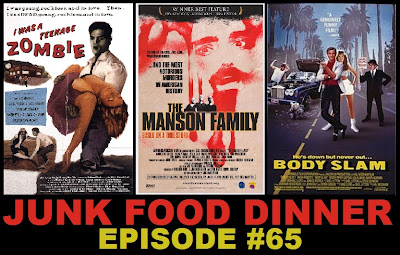 Daughters lock up your mothers, Junk Food Dinner returns! This week we take a look at three very different films and then say things about them in turn. It's new!

Up first, we get chummy (and a little gushy) with an oft overlooked horror/comedy entry into undead high school lore, I Was A Teenage Zombie from 1986. Not to mention it's killer soundtrack comprised of the likes of The Fleshtones, The Db's, The Waitresses, Alex Chilton, and more!

Next, Gem City's own Jim Van Bebber takes us on a tripped out ride through the eyes of Charlie and company in the 2004 film The Manson Family based on the infamous 1969 murders and the subsequent trial.

Finally, we learn that some nostalgia might be misplaced in the misstep that is Body Slam starring Dirk Benedict and Roddy Piper. Featuring a whole host of 80's footnotes. Everyone from Charles Nelson Rielly to Billy Barty! See you at Summerslam!

Also, we have Nerds News, this week's DVD and Blu-Ray releases and much more!

Also, if you like the show, please take a minute and subscribe and/or comment on us on iTunes, Blubrry or Podfeed.net. We gain precious nutrients from your love and support.