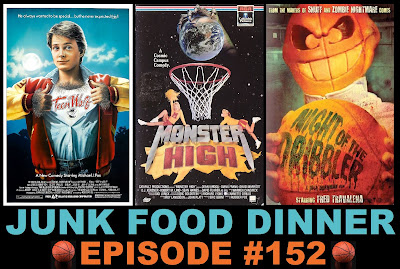 Boom Shaka Laka! The world's #1 cult movie and basketball podcast finally gets around to covering not one, not two, but THREE basketball-themed horror comedies.

Up first, Michael J. Fox is Scott, a teenager going through some changes. But unlike your average pubescent experience, Scott's transformation into manhood is a bit more supernatural. Fortunately, he is able to use his new found powers to dominate on the court, in the 1985 hit comedy Teen Wolf.

Then, two goofy aliens steal a doomsday device (shaped like a basketball, of course) and accidentally find themselves on Earth. When the destructive force known as Mr. Armageddon is released from the basketball, he unleashes an army of monsters onto an unsuspecting high school. Now the helpless teens need to take on Mr. Armageddon in a game of hoops to save the world in 1989's Monster High.

And finally, a high school basketball equipment manager is trying to make the team while the team's captains are being picked off one by one by a mysterious killer. Meanwhile, famous impressionist Fred Travalena hams it up as multiple characters in the extremely wacky Night of the Dribbler from 1990.

All this plus witty banter between friends, soundboard antics, Mark's second to last show, songs about basketball, intense Junk (voice)Mails, DVD & Blu-ray releases, Nerd News and so much more!

Also, if you like the show, please take a minute and subscribe and/or comment on us on iTunes, Stitcher, Blubrry or Podfeed.net. We gain the ability to dunk from your love and support.
Labels: basketball Fred Travalena Michael J. Fox Monster High Night of the Dribbler Podcast Teen Wolf