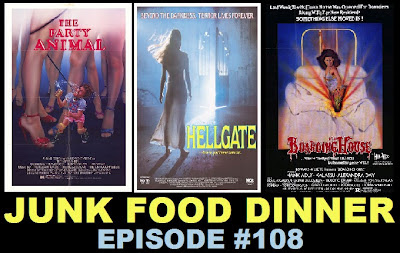 Get ready to party, because another beer-soaked episode of Junk Food Dinner is upon us.

This week the fellas go back to college with Pondo Sinatra, an unattractive, unlikable rube who's dead set on getting laid. Despite a series of whacky misadventures, Pondo still remains a virgin. That is, until a chemical reaction turns him in a sexual dynamo, in the 1985 sex comedy The Party Animal directed by David Beaird and starring Matthew Causey and Timothy Carhart.

Then, we take a trip to a remote town out west with Horshack from Welcome Back, Kotter (Ron Palillo) and his goofy friends as they try to unravel the secrets of a decades old murder and a sexy ghost with fake tits in the 1990 horror flick Hellgate directed by William A. Levey.

And finally, an eccentric homeowner with telekinetic powers (John Wintergate, who also wrote and directed the film) puts an ad in the paper luring attractive young women to move in with him. But between parties and dips in the hot tub, the women begin dying off in one of the first shot-on-video horror films, Boardinghouse from 1982.

Also, if you like the show, please take a minute and subscribe and/or comment on us on iTunes, Stitcher, Blubrry or Podfeed.net. We gain prowess with the ladies from your love and support.
Labels: Abigail Wolcott Boardinghouse David Beaird Hellgate Horshack John Wintergate Kalassu Kotter Matthew Causey Podcast Ron Palillo The Party Animal Timothy Carhart Welcome Back William A. Levey