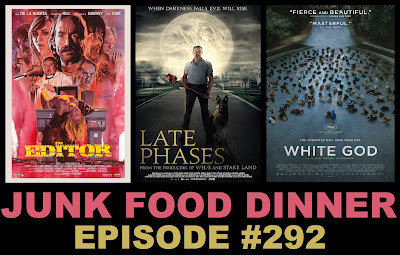 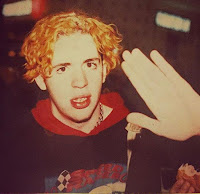 As 2015 comes to a close, the guys at JFD are feverishly trying to take in all the movies they missed over the past year. And since Parker is out this week celebrating his milestone 45th birthday, we brought in the best in the biz, Mike Dikk from Kissing Contest to join us to chat about dogs, werewolves and fake Italians.


Up first, the Astron 6 crew (Father's Day, Manborg) return with their latest sleazy offering, this time sending up Italian giallo film in The Editor. When cast and crew members start turning up dead on a 70's film set, the reclusive editor is the prime suspect. Plenty of goofy humor, bad dubbing and boobs and gore galore. Plus appearances by Paz de la Huerta, Udo Kier and Laurence R. Harvey.

Then, a blind veteran (Nick Damici from Stake Land) is moved into a retirement community by his son (Ethan Embry) but quickly realizes there's more to worry about than the uptight old neighbors when the full moon unleashes a series of werewolf attacks in Late Phases. This one also features some great cameos like Tom Noonan, Tina Louise and Dana Ashbrook.

And finally, a young Hungarian girl is sent to live with her father for a few months, but quickly realizes that her dog isn't welcomed. When her dad abandons the pooch on the side of the road, the poor mutt is forced into a life of dog-fighting. But pushed to the edge he organizes other dogs to form a full scale pup-rising and seek revenge on those who have wronged him in White God.

All this plus witty banter between friends, a warning to ignore IMDB's year for these movies, songs about what Sean likes to drink, Wayne being a bully about French movies, Nerd News, Werewolf chat, Blu-rays with monster handjobs, discussion of the Garbage Pail Kids movie soundtrack on vinyl, absolute confidentiality, continued lack of overt police involvement and a whole lot more!

Got a movie suggestion for the show, want to give your opinion on a movie we talked about or just want to tell us we suck? Drop us a line atJFDPodcast@gmail.com. Or leave us a voicemail: 347-746-JUNK (5865).Also, if you like the show, please take a minute and subscribe and/or comment on us on iTunes, Stitcher, Blubrry or Podfeed.net. Check us out onFacebook and Twitter! We avoid a life in dog fighting with your love and support.