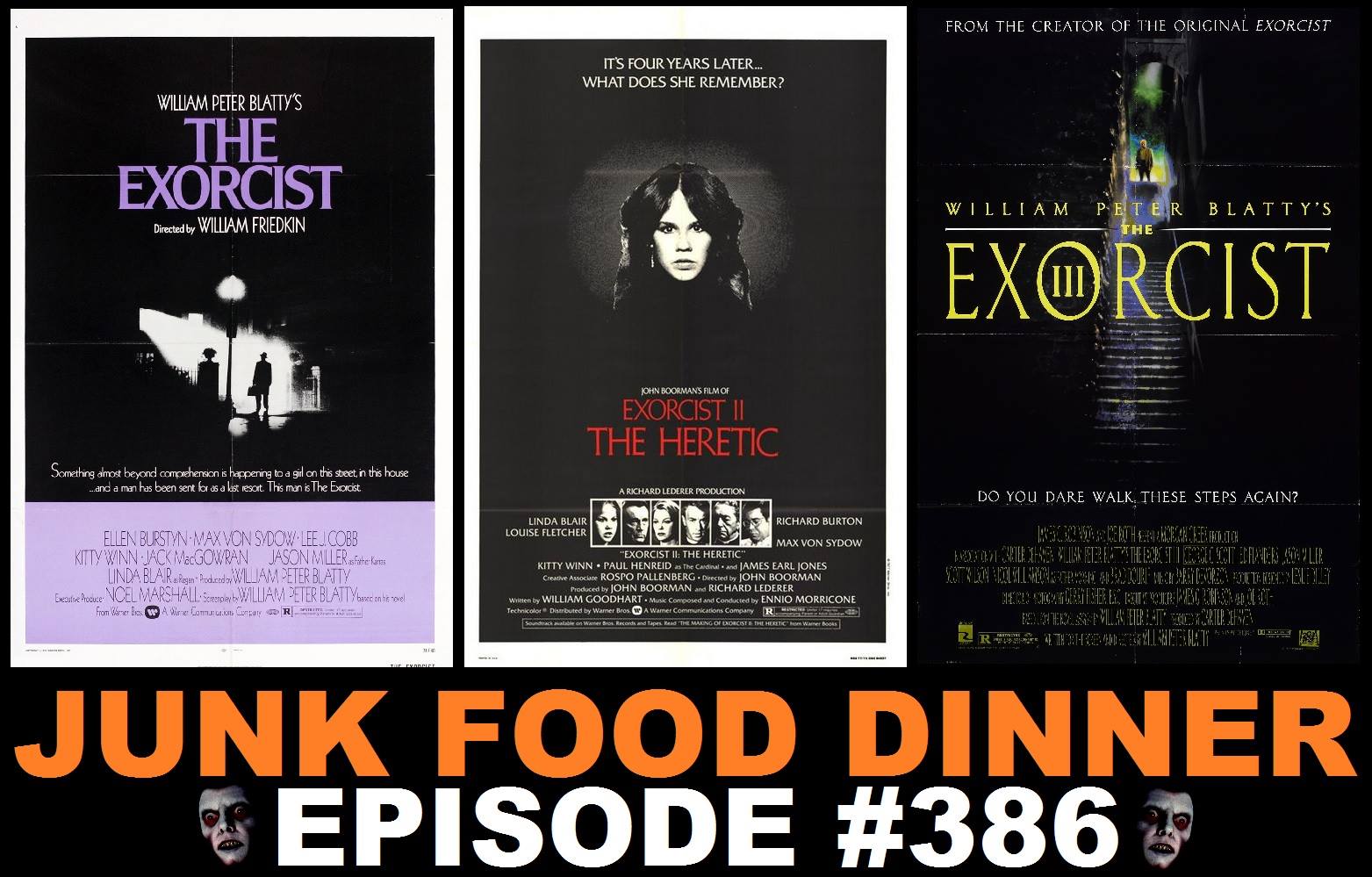 Can grampa movies really be scary? We're finding out this week with our Exorcist theme show. And as an old man in a convenience store might tell you, this is one of them Oscar-winnin' horror movies! And it's got some sequels of variable quality that are also discussed, all together with extra special guest Mark Freado live from the Big Apple New York City!

First up! William Friedken's seminal horror film The Exorcist from 1973, scared the crap out of a lot of people on its initial release, but can this tale of a young girl possessed by Satan still shock and offend? Even if it can't, we've got jokes about pea soup!

Next! It's 1977's Exorcist II: The Heretic, and the less said about it, the better. It does a star Linda Blair, though!

Finally, there aren't any more Exorcist movies to talk about after we discuss The Exorcist III, from 1990! Brad Dourif shows up in this movie based on a non-Exorcist book (Legion), that was written and then directed by ol' Blatty, the author of the original Exorcist book, which was then transformed into an Exorcist movie. Confused? Listen and we'll sort you out.

All this plus witty banter between reunited podcats, Mike Dikk vaping in the corner, lots of movie stuff happenin', just fartin' around on the Internet, sick Hock' upgrades, rating callers on that Boob Scale, Wayne is a piece of shit with no meaning in life, shouldn't a horror channel be a no-brainer?, our favorite theatrical splash zones, pinky-out prestige horror films, our weekly news and Blu-ray Picks, no mention of police involvement, all-wet sneezes, super-mega belches, sideways armpit farts, the retold benefits of podcasting, unbrominated vegetable gleeks and a whole lot more!

Also, if you like the show, please take a minute and subscribe and/or comment on us on iTunes, Stitcher, Blubrry or Podfeed.net. Check us out on Facebook and Twitter! We'd love to see some of your love on Patreon - it's super easy and fun to sign up for the extra bonus content. We'd rip a priest's face off his head for your love and support.
Labels: Demon Exorcism george c. scott Horror Junk Food Dinner Linda Blair mark freado Podcast Possesion Schlocktober the exorcist William Friedkin William Peter Blatty