JFD95: Magic of the Universe, Warlock: The Armageddon, Chrome and Hot Leather 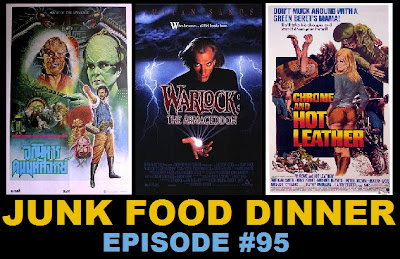 This week, Junk Food Junkies; Kevin, Mark, & Parker learn about the power of magic, mirth, and motorcycles! Give yourselves over as Episode #95 takes hold and refuses to let you go (in a loving way, though)!

Up first, Jamir the magician discovers his powers are all too real when he accidentally sends his daughter to another dimension inhabited by an evil, big-headed witch bent on revenge! A slew of crazy monsters - including Globo, played by...himself? -and impressive practical effects make this 1987 Portuguese fantasy film worth a look (or at least some of us think so) - MAGIC OF THE UNIVERSE! (read that with an echo, please.)

Then, Parkers not-even-sort-of-secret love affair with Julian Sands continues as we talk about WARLOCK: THE ARMAGEDDON from 1993. Not quite a sequel, more of a spin off. This time a family of Druids have cause for concern when terrifying prophecies regarding the return of a certain blonde-haired Warlock begin to come true. Can the two warriors - Kenny & Sam - stop him before he collects the magic runes needed to bring our dark lord Satan to Earth?

Finally, we hop on our sponsored Kawasaki bikes and ride, ride, ride as we discuss CHROME & HOT LEATHER from 1971. After returning home, a Green Beret is shocked to learn that his attractive finacee' and her friend have been killed by a biker gang. Now it's up to him and his crew to beat them (to death) at their own game! Though not our first (and certainly not last) biker film, this one presents a whole host of questions, like: How can a movie co-starring Marvin Gaye have such awful music?

Due to technical difficulties there's no NERD NEWS or DVD RELEASES this week. Also, no hilarious soundboard drops. We know, we know. We're sad too. We still manage to squeeze in some JUNK MAIL, WITTY BANTER BETWEEN FRIENDS, VARIOUS LEVELS OF QUALITY MUSIC, and MORE!

Got a movie suggestion for the show, want to give your opinion on a movie we talked about or just want to tell us we suck? Drop us a line at JFDPodcast@gmail.com. Or leave us a voicemail: 347-746-JUNK (5865). We haven't had a voicemail in a while! Let your voice be heard!

Also, if you like the show, please take a minute and subscribe and/or comment on us on iTunes.
Labels: All Clues No Solutions bikr gangs Chrome and Hot Leather Julian Sands Lee Frost Magic of the Universe Marvin Gaye Parkers boner Portuguese Warlock the Armegeddon