JFD273: Men Behind the Sun 2, The Human Centipede III (Final Sequence), Inside 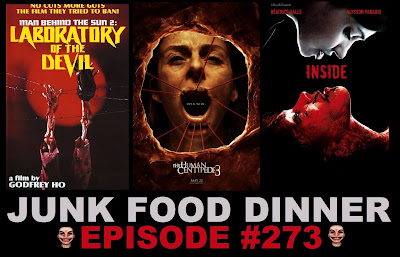 This week: the thrilling conclusion to this year's two-part Ghoul Summer event. It's been a wild, sticky ride and a burning question remains: will the boys have enough fortitude to survive this ghastly trio of disgusting flicks? They're joined by professional podcaster Katie Rots of Rotten Rantings to sort it all out.

First up, we return to Harbin, China (last known whereabouts of The Memphis Maniac) with a sequel to last year's historically ghoulish Men Behind the Sun. That's right, it's Men Behind the Sun 2: Laboratory of the Devil, directed by Godfrey Ho! Like the first film, it chronicles the real-life human experiments carried out by the Japanese Unit 731 in occupied China during WWII. Unlike the first film, it's directed by a man who cobbled together over 150 ninja films out of stolen and stock footage!

Finally, we swing over to Paris to check out one of the more acclaimed entries into New French Horror, 2007's Inside! This home invasion tale features an extra ghoulish twist - a 9-months pregnant protagonist and a lot of gore. It also might feature a zombie, depending on your point of view (but probably not).

All this plus witty banter between friends, ghoul saturation, the secret origin of 25-to-5, the time before screencaps, that time Katie toppled the Twin Towers, Amish cocaine rings, nerd news and this week in dvd, classic bodypart scenes in movies, eating watermelons like a tazmanian devil, bang bang laser, turtle tongues, how skulls work, absolute confidentiality, continued lack of police involvement, sneezes, belches, gleeks and a whole lot more!

Looking for more Ghoul Summer action?
Check out the Ghoul Summer Master Post, which will soon be updated with all of the cross-podcast GS Jams for 2015.

Also, if you like the show, please take a minute and subscribe and/or comment on us on iTunes, Stitcher, Blubrry or Podfeed.net. We just might be able to muster the strength for another year of Ghoul Summer, only for your love and support.