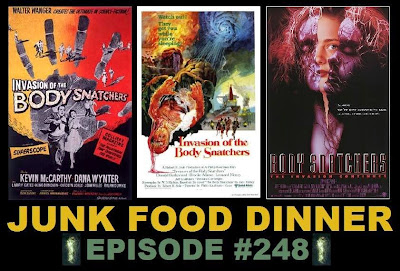 Sci Fi ebruary on JFD begins now! Or did it already begin... in the future? And is this really JFD ... or body snatchers?

First, we take a look at influential classic that gave birth to a (small) genre: "Invasion of the Body Snatchers" from 1956! Kevin McCarthy (UHF) stars as a doctor in a small California town who, when he's not getting chicks, discovers that plant-like aliens are posing as the town's residents to take over the world. The flick's directed by Don Siegel (Dirty Harry).

Next, Donald Sutherland, Leonard Nimoy and Jeff Goldblum take over for McCarthy in 1978 as the body snatchers take over San Francisco. The effects and horror are top notch in what some call the best remake of all time.

Finally, Abel Ferrara (Ms. 45) directs a script co-written by Stuart Gordon (The Reanimator) and Larry Cohen (The Stuff) in '93's Body Snatchers. This time, the pod people are taking over a military base in the south inhabited by Meg Tilly, Forest Whitaker and the tough girl from Chucky 2.

All this plus witty banter between friends, Clayton Miller Chat(!!!), Sweetman calls, DVDs, The Face to Face Chat Movement and so much more!

Also, if you like the show, please take a minute and subscribe and/or comment on us on iTunes, Stitcher, Blubrry or Podfeed.net. We avoid carny rape with your love and support.