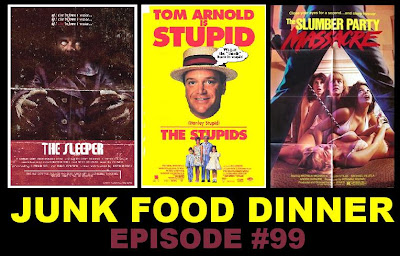 It's our 100th Episode Eve, and we've got a real doozy of a show before we enter triple digits!

Up first, we're joined by writer/director Justin Russell as we discuss his new film THE SLEEPER. It's 1981 and the girls of Alpha Gamma Theta are getting ready for rush week! Logically, it's time to party! But an uninvited guest is about to significantly reduce the RSVP list. It's another round of Ohio horror in this loving homage to the great American slasher film.

Second, Tom Arnold is an idiot and so is his family as a series of wacky events leads to them accidentally saving the world. A star-studded cast and misplaced musical number round out this mid-90's John Landis film - THE STUPIDS!

Finally, it's back to Slashertown! Tawdry high school girls exclude their nerdy classmate/neighbor while they talk about fornicating and smoke Maui Wowie. Sadly, for them there's a maniac wielding a GIGANTIC drill with a bloodlust that cannot be satisfied. A staple of video store shelves and a classic of the genre - SLUMBER PARTY MASSACRE from 1982!

No Nerd News/DVDs this week, but don't worry - they'll be back.

Also, if you like the show, please take a minute and subscribe and/or comment on us on iTunes, Stitcher, Blubrry or Podfeed.net. We get high on your love and support.
Labels: John Landis Justin Russell Maui Wowie Ohio Slumber Party Massacre The Sleeper The Stupids Tom Arnold