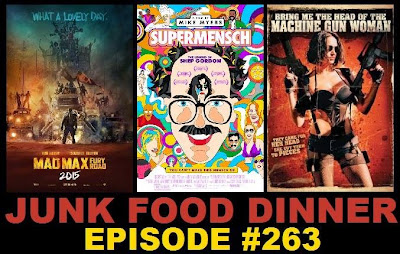 Enjoy yourself this week! Kissing Contest's The Producer is in the JFD studios this week, because Sean's out living in a spaghetti western.

Then, a documentary about one of Hollywood's unsung heroes in 2013's "Supermensch: The Legend of Shep Gordon." Mike Myers (the "Wayne's World" one) co-directs this talking head doc about Alice Cooper's manager.

Finally, a DJ gets tasked with an assassination in 2012's "Bring Me the Head of the Machine Gun Woman." It's Chilean grindhouse nostalgia meets video game obsession.

All this, plus junk mails, DVDs, Face to Face Chat, Anna Kendrick Chat, Riverboat Gamblers Chat, Doan's fanbase of children, LeBron pride, and so much more.

Leave us an iTunes review, or send a voicemail or tell all your friends to listen. Be a bud!