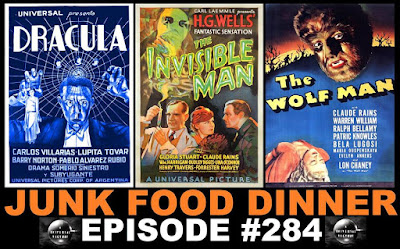 Junk Food Dinner. 284. Crank up that phonograph, JFD is universally old-school. We've got a theme celebrating (or maybe complaining about) The Universal Monsters.

First, Count Dracula arrives in England to drink blood and find a bride in 1931's "Dracula." Don't expect any Bela Legosi, though. This is the Spanish version. Filmed on the same sets at the same time, just with different actors.

Then, a scientist goes mad with power after an experiment goes wrong in 1933's "The Invisible Man." This flick's based on the classic HG Welles' book that created the invisible mans genre.

Finally, a man gets bitten by a wolf while visiting family in 1941's "The Wolf-Man." Lon Chaney Jr, Bela Legosi and Claude Rains deal with the curse of lycanthropy in this flick that created many of the werewolf rules.

All this, plus GWAR Chat, DVDs, Nerd News, lots of Junk Mails, farts, a fake German, Mark from Oakland, all the goofy callers, and so much more.