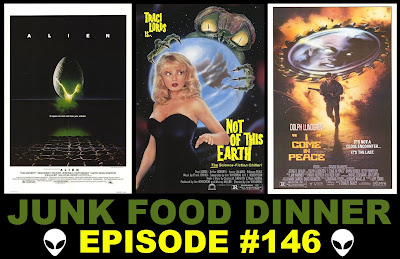 Greetings, Earthling! This episode marks the beginning of Junk Food Dinner's "Sci-fi-ebuary", our month-long tribute cult-y science fiction films. This week, we're joined by long-time friend of the show Kevin Merryman to start things off with our tribute to those little green men from beyond the stars, aliens.

Up first, the crew of a commercial space ship discovers a nest of eggs on a foreign planet. After one of the crew members is attacked by an unknown organism and brought back aboard the ship, the rest of the crew quickly becomes prey to one of the galaxy's most vicious predators in 1979's Alien. This sci-fi classic directed by Ridley Scott and written by Dan O'Bannon stars Tom Skerritt, Sigourney Weaver, Harry Dean Stanton and Yaphet Kotto.

Next, a space man disguised as a human comes to Earth, looking for blood that can save his alien race and enlists the help of sexy nurse Traci Lords in 1988's Not of This Earth. This goofy sc-fi sex comedy, directed by Jim Wynorski, is a remake of a 1957 Roger Corman-directed feature of the same name.

And finally, an intergalactic drug dealer is wreaking havoc on Earth and it's up to renegade cop Dolph Lundgren and his hard-nosed, by-the-book partner Brian Benben to stop him in the 1990 sci-fi action flick I Come In Peace (AKA Dark Angel)

All this plus witty banter between friends, soundboard antics, nerdy music chat, Junk (voice)Mails, DVD & Blu-ray releases, Nerd News and so much more!

Also, if you like the show, please take a minute and subscribe and/or comment on us on iTunes, Stitcher, Blubrry or Podfeed.net. We gain dead chickens from your love and support.
Labels: alien Brian Benben Dan O'Bannon Dolph Lungren I Come in Peace Jim Wynorski Not of This Earth Podcast Ridley Scott sci-fi-ebuary Sigourney Weaver Tom Skerritt Traci Lords Yaphet Kotto