JFD387: The Manitou, Strange Invaders, Night of the Demons 2 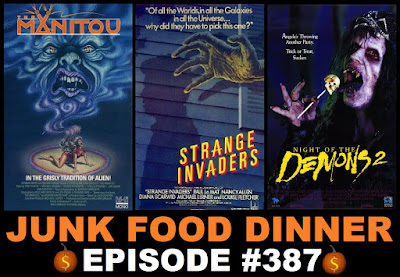 With Halloween a mere few days away, JFD gets some tricks and treats from our Patreon pals as we look at three spooky flicks to get you in the spirit of the season.

Up first, Susan Strasberg plays a woman with an unusual growth on the back of her neck but when doctors discover it's an evil Native American midget growing in her body, it's up to her psychic friend (played by Tony Curtis) to save her (and the world) in The Manitou from 1977.

Next, a Columbia University professor travels to a small midwestern town looking for his ex-wife who has disappeared but discovers a secret alien conspiracy. He teams up with a tabloid journalist (Nancy Allen) and a mental patient (Michael Lerner) to stop the evil saucer men in in Strange Invaders from 1983.

All this plus witty banter between friends, Halloween candy chat, fireworks chat, an in depth look at The Snowman and Tyler Perry's Boo 2! A Madea Halloween, our world famous weekly Nerd News and Blu-ray Picks, continued lack of overt police involvement, and a whole lot more!