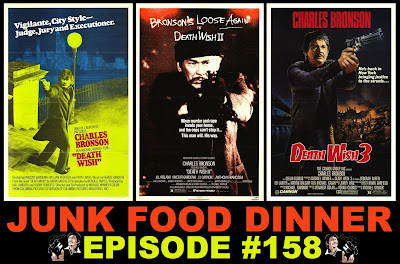 Creeps, low-lifes, scumbags, hoodlums and petty thieves beware! This week on JFD, it's all about Charles Bronson cleaning up the streets as we examine the first three Death Wish films.

Up first, Charles Bronson stars as Paul Kersey, a liberal architect in New York City. But when a group of thugs (including a young Jeff Goldblum) attack his family, leaving his wife dead and his daughter in a catatonic state, Paul is forced to take the law into his own hands. Armed with his new .32 Colt revolver, Paul hits the filthy streets of the Big Apple and begins a vigilante killing spree. Soon Paul is making the news and gaining the attention of the police chief Frank Ochoa played by Vincent Gardenia in the 1974 crime drama that started it all, Death Wish.

Then, Bronson is back as  Paul Kersey, only this time he and his daughter have relocated to L.A., but Paul quickly learns that The City of Angels is not much better than New York, when another group of thugs (this time including a young Lawrence Fishburn) wreak havoc on his family. Of course, it's not long before Paul is taking his .380 Beretta pistol out for some more creep hunting, all while trying to avoid the cops (including a reprise role from Vincent Gardenia) in the long-awaited sequel Death Wish 2 from 1982.

And finally, our hero Paul Kersey moves back to New York only to find his friend dead and his neighborhood overrun by cartoonish punks (this time including a young Alex Winter) who are menacing the innocent folks of the community. Needless to say, Charles Bronson isn't going to just sit around and let this happen, as he is soon, once again, mowing down scumbags left and right in the most over-the-top and violent entry into the series, Death Wish 3 from 1985.

All this plus witty banter between friends, Nerd News, this week's DVD & VHS releases, complete confidentiality, no police involvement, songs about vigilantes, Donald Lloyd of the Junk Food Dinner Warehouse, Junk (voice)Mails, and so much more!